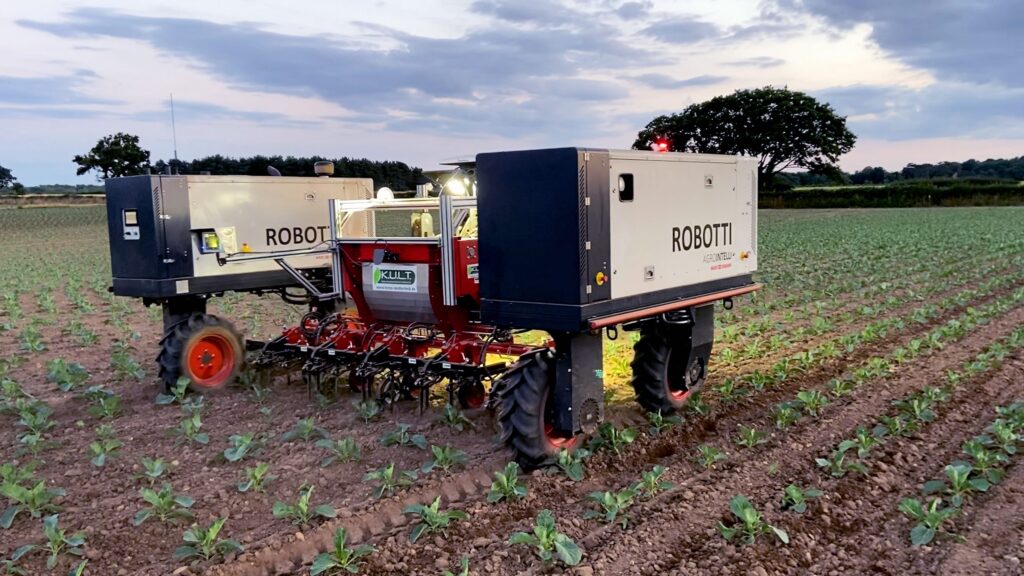 While labour on farms is more readily available in South Africa, the need for greater efficiency in low-skilled, repetitive tasks matches that of Europe. Developers of agri-robots have therefore focused on tasks such as ploughing, weeding, seeding and spraying.

AgroIntelli, a leading Danish agricultural robotics company, has launched an autonomous robotic system called Robotti that can take care of all these tasks, freeing up labour to focus on higher-skilled jobs.

Robotti can be used on a range of crops, including onions, salad plants, leeks, potatoes, carrots, parsnips, strawberries and pumpkins. Any farming implement up to 3m wide can be attached to Robotti, so ploughing, mowing, seeding, spraying, weeding or ridging can all be carried out autonomously.

The machine can be monitored remotely from a smartphone, and notifies the farmer if it stops unexpectedly. When creating a field plan, the software registers notes all known obstructions such as fences, power poles and bushes, and the machine stops immediately should it encounter an unexpected obstacle.

Jakob Bebe, AgroIntelli’s chief commercial officer, explains that Robotti can cover about 1ha/hour, depending on the task, and can run 24 hours/day, as it is equipped with lights for night driving.

“Robotti runs on biofuel, so the carbon footprint is reduced. And at 3000kg, it weighs less than a tractor, which means less soil compaction,” he adds.

Robotti is priced at around €180 000, and Bebe says that a farmer can expect a return on investment in less than two years.

The driverless machine isn’t an entirely alien development, and there are plenty of similarities with conventional tractors. For starters, it has a pair of orthodox diesel engines and a three-point linkage, as well as pto and hydraulic outputs to run regular farm implements.

The three-cylinder, 75hp Kubota engines sit on opposite sides of the frame, but instead of powering the functions in equal measure, one is dedicated to propelling the Robotti while the other takes care of the pto and hydraulic demand.

For tillage work, it’s effectively a 75hp tractor, as both engines can’t be used to share the workload on the same task. So on less power-hungry hoeing duties, only one of the blocks will be worked anywhere near hard.

The upshot is relatively low fuel consumption, with Agrointelli suggesting a thirst of just 3-6 litres/hour at a forward speed of 5kph, which can be maintained 24 hours/day.

By opting for regular diesel and hydraulic systems, servicing and maintenance can be completed locally without the involvement of a specialist and the risk of having to wait for parts to be shipped in from abroad.

The Robotti project has been in existence since the early 2000s, when it started as a research collaboration between several universities. In 2010, it was taken on by Danish manufacturer Kongskilde, which kept the project until 2015, when a breakaway company – Agrointelli – was formed by a number of ex-Kongskilde employees.

This is when the Robotti project gathered pace. Roughly 30 prototypes were trialled, starting with a 25hp unit, moving up to 50hp and then to the 150hp, twin-engine setup that is commercially available today.